As Rich as Rockefeller?

All of you who are struggling to get your next foundation grant application pulled together and those of you who work earnestly as foundation staff or trustees may want to pause and think about how these entities – the powerful, life-giving, and capricious foundations – came into existence. Here’s the short version.

Though charitable foundations have a long history in the United States (some credit Benjamin Franklin with creating the first foundation, the progenitor of the Philadelphia Foundation), they did not gain prominence until early in the twentieth century.

The first two permanent foundations of note were created by Andrew Carnegie and John D. Rockefeller. Let’s look at Rockefeller, courtesy of “Titan,” a remarkable biography by Ron Chernow. 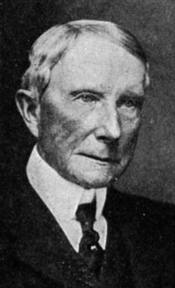 Rockefeller was the richest man in the world, by a long shot: the near monopoly on the extraction, refinement, and distribution of petroleum will do that to a person. In the second half of his life, Rockefeller, a deeply religious man, tried his best to give away much of his fortune. But try as he might (and he tried mighty hard – for example, he gave $35 million for the creation and development of the University of Chicago, which was real money a hundred years ago), each January found him even richer than the January before.

Rockefeller was distraught: he wanted to leave a benevolent mark on the world, and he didn’t want his children inheriting such a large fortune that they would slip into leading dissipated lives. But Rockefeller had a much harder time giving away his fortune than building it. He eventually gave in to the suggestion of William Taylor Gates, his advisor on all things philanthropic, and created the Rockefeller Foundation.

In short, John D. Rockefeller created the Rockefeller Foundation because he was making so much money that it was almost impossible in his lifetime to give his fortune away responsibly. His solution was to take a big chunk of his assets and place it in a foundation. His heirs and others could use the foundation to give to charitable endeavors on into the future.

Let’s think about foundations and how they work. The notion, at least with a permanent foundation, is that its assets will be invested in stocks and bonds and other vehicles, and an amount equal to 5% of the year-end value will be distributed (or used for program services) in the next year. Some foundations distribute more, and some foundations give away both principal and income over the course of a set number of years. But the majority give away 5% or just a bit more each year. The impact on society in Year One of the foundation’s existence is only 1/20 of what it would have been had the entire value been given to actual service-providing nonprofits. But the rationale is that over the years – and perpetuity is a long time, so that’s a lot of years – more will go out to do good than if all the funds had been distributed immediately.

That’s the traditional view. I would say that it’s a lot more complicated than that, because that formula only measures cumulative dollars distributed over time, not societal impact. If you distribute money to nonprofits immediately and they do important things with it – save lives by curing diseases, educate students who otherwise wouldn’t have gone to college, stop environmental degradation before things slip past the point of no return – I would say you are having vastly greater impact.

Think of it this way: countless studies have shown that the prospects of children here in the U.S. and in developing countries alike are vastly improved if their mothers are educated. As Jonathan Alter writes, “When girls go to school, they marry later and have fewer, healthier children. For instance, if an African mother has five years of education, her child has a 40 percent better chance of living to age 5.” The experts agree: if you want to create a population of young people who go to school instead of jail, who become engaged citizens, and who are financially independent and creative and vibrant, one of the best things you can do is to educate girls and women.

So if you were a wealthy person hoping to make the world a better place, would you spend money now to educate as many girls as you could, so that they could raise a generation of healthy and productive kids, who then would do the same with their children? Or would you create a foundation that would spend 5% of its assets each year for that purpose (some of which would go to pay program staff), while costing another 1% or so annually for the investment management? I don’t think there’s any question but that spending the money now would give you the greatest overall social impact.

And yet, what do wealthy people do? They create foundations.

Creating a foundation makes sense if you’re John D. Rockefeller and you literally can’t distribute your fortune. I’ll give the nod to Bill Gates on this one, too – with a fortune that size, and the rate by which it continues to grow, a foundation makes sense, and I like that Bill and Melinda Gates have established a clause so that the foundation distributes all its assets fifty years after their deaths. (That is, it’s not perpetual.)

But for run-of-the-mill wealthy folks who are able to leave $1 million or $10 million or even $100 million to charity? Do that – leave it to charity. Don’t create a foundation. Your advisors might suggest otherwise, but the lawyers and accountants and investment managers have a vested interest in the creation, caring and feeding of a permanent foundation. Don’t buy the line that your kids will grow closer overseeing the foundation. Don’t give in to the notion that a foundation with your name on it will give you some form of immortality.  And realize that there are lives and a planet to save now – so do it with 100% of your gift, not 5%.