I am pleased to discover that I have a few things in common with Warren Buffett.

(Unfortunately,  being fabulously wealthy is not one of them. 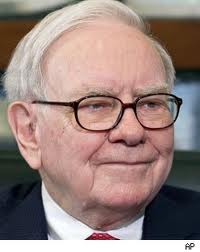 Like Warren, I’m not one for formalities, and I’m known to appreciate a bargain. So I got a kick out of hearing the details of his 2006 marriage to his wife Astrid. They had a simple ceremony with immediate family at the home of Warren’s daughter Susie. Then the family celebrated with a meal at the Omaha Bonefish Grill, where Warren made a point of ordering off the Seniors Menu.

Truly, that’s the kind of wedding reception I could get behind. Why waste money, even if you’re one of the richest men in the world?

I also find that Warren and I agree about the inefficiencies inherent in creating a perpetual charitable foundation.

But the truly notable part about the arrangement is that Buffett insisted that all the money he contributes is granted out in the same year. Indeed, he donates $1.5 billion or so each year, and all $1.5 billion goes out to charity – just about doubling the grants that the Gates Foundation distributes annually.

People keep asking me why I’m opposed to the creation of perpetual charitable foundations. And I respond: There are problems in the world that need solving today: environmental degradation and climate change; disease; famine; homelessness; injustice; lack of access to education. If you have money to spend on the problem now, why not spend it now? Don’t invest your money forever in a foundation, giving the investment managers and the lawyers and the accountants and the foundation staff their annual cut, with only a few percent a year going out in grants. Instead, get the money out to solve the problems now before more lives are lost and the planet irreversibly damaged.

This is still a minority viewpoint, but I think that’s mostly because people haven’t thought about it, and because many of the people who are entrenched in the philanthropic system are so adamant that nothing needs to change.

Schopenhauer said, “All truth passes through three stages. First, it is ridiculed. Second, it is violently opposed. Third, it is accepted as being self-evident.” Sometimes these stages can follow one another with stunning quickness. Think of the revolution we’re seeing in how people view same-sex marriage. Twenty years ago, it was common to openly mock the idea. Only 12 years ago opponents hyperventilated and implied that the world would come to an end because of the Vermont civil unions bill. Today same-sex marriage is legal in several states and many countries, and we have a majority of people in the United States, including the President, endorsing the concept. Even deep-set attitudes about emotional social issues can change very quickly – when people realize that the new idea is fair and true.

This is not to say that something as relatively arcane as how a charitable gift is structured has, or ever will have, the attention of the public at large. But it’s worth noting that in a society where, alas, great wealth is often seen as a proxy for wisdom, the most famous and wealthy investor in the world says that it’s better to apply one’s wealth to charitable purposes today than to lock it up in a permanent foundation and dribble out the proceeds year by year. I’m happy to join him in that sentiment. Maybe Warren and I are onto something?