Why Mergers Make Sense… On Occasion

With funding cuts and rising demand for services, nonprofits are in a bind. One reaction – which sometimes makes sense, but often doesn’t – is to consider merging with another organization. After all, if the combined organizations paid only one CEO instead of two, and one CFO instead of two, and if they merged their back shop operations, there would presumably be efficiencies. 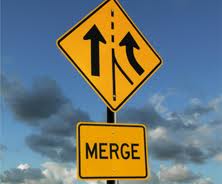 confusion in the community about who is providing which service, partly to cull the weaker nonprofits, and partly, I assume, so they have fewer potential grantees to choose between. And grantees, at the very least, have to pay lip service to what their funders are saying. But do nonprofit mergers really make sense? It depends.

Another promising situation for a merger is where a very small organization is providing a  valuable service, but it simply doesn’t have the size to be economically viable. It’s logical to merge that tiny entity into a larger umbrella organization that has the strengths of scale: viable finance, IT, development, and HR departments — and reliable funding sources.

Then there are proposed mergers of organizations of similar size that provide similar services in the same geographic area. These can be more challenging.

If you’re a board or staff member of an organization contemplating a merger – or being pressured to do so – check out Thomas A. McLaughlin’s Nonprofit Mergers & Alliances. McLaughlin talks about two kinds of nonprofits – the “prototypers” and the “industrializers.” Prototypers are young organizations in relatively new fields, such as community economic development or climate change activism. They tend to have a dynamic CEO who sets the tone. They’re opportunistic: something comes along that fits their mission and they hop right to it. In the best of ways, they’re making it up as they go along. They’re characterized by innovation, experimentation, quirkiness, and enthusiasm. And, to critics, they may come across as scatter-shot and impulsive.

Industrializers, on the other hand, are older organizations in established fields. They provide known, tried-and-true services. Their organizational charts have a clear and established hierarchy. Think of hospitals. Though hospitals put a great deal of effort into differentiating their services, they all provide, well, hospital care. Day surgery. Kidney dialysis. Emergency rooms. Maternity wards.

It’s relatively easy for industrializers to merge, according to McLaughlin. Hospitals, indeed, do it all the time. United Ways from adjacent communities do it. Adjoining girls’ and boys’ private schools do it. Sometimes it proves to be a mistake, but more often than not, it works out.

It’s much more difficult, on the other hand, for prototypers to merge. Generally, each organization has a distinct and strong culture. They resist compromising their processes, which were established, after all, by the staff members who in most cases are still there. Prototyper organizations are often brilliant on their own, but they tend to get defensive and a bit irrational if they have to change their ways of doing business. Merging two prototypers together rarely works.

But if two prototyper organizations are both going along pretty well – leave them be. There may indeed be some efficiencies to be gained through a merger, but that won’t be worth the trauma and loss that come from combining the cultures. And think of the relationships each organization has built through the years with donors: it’s not at all a sure thing that the donors will stay with the new combined entity. They may miss the old place or the dismissed CEO and take their donations elsewhere.

All of this said, you may work for a prototyper organization that’s being inappropriately pressured to merge by funders. You may have done a thorough analysis and decided that a merger didn’t make sense — yet the funders may still be pressuring you. My suggestion: take a minute and imagine suggesting to the funders that they merge with another organization to gain efficiencies, or that they simplify their application or reports, or that they streamline their operations in a way that makes sense to you.

You can’t actually tell the funders these things, of course, but you can think them.  And rebellious thoughts like these may help get you through difficult economic times.