When a philanthropist pays off the college loans of 400 students, that’s a good thing, right?

During his recent speech at the Morehouse College graduation, Robert F. Smith shocked and thrilled the crowd by promising to pay the college-related debt for the entire graduating class. Reaction to his gift (estimated at $40 million) was immediate and enthusiastic – at the ceremony itself, of course, and around the country. 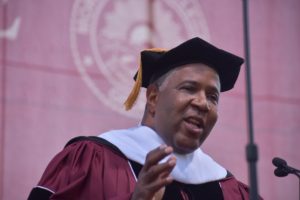 But Smith’s gift also spurred a debate about wealth disparity, tax breaks for the rich, and the way in which the wealthiest sliver of society wields its philanthropic power.

Anand Giridharadas, the author of the provocative Winners Take All: The Elite Charade of Changing the World, pointed out on Twitter that, while Smith was no doubt extremely generous, for decades he had also benefitted from the notorious “carried interest” loophole that had taxed his earnings at an artificially low rate and saved him and other private equity and hedge fund barons billions in taxes. More to the point, Smith has spoken on the record defending the very tax loophole that helped him amass his fortune. Giridharadas cites a New York Times analysis that indicated that closing the carried interest loophole would increase revenues to the federal government by $180 billion over ten years – money that, if used to reduce college debt, could significantly help a vastly larger number of students than the 400 or so at Morehouse.

Predictably, there was then a counter-reaction to this critique. Phil Buchanan, who leads the Center for Effective Philanthropy, asserted in a Chronicle of Philanthropy op-ed that Giridharadas and others had “jumped the shark” in their criticism, seeing every philanthropic act as a cynical way of laundering bad reputations. Buchanan writes, “…there has lately been a turn from helpful and thoughtful criticism to off-based [sic] generalizations and statements that veer into the absurd.” Buchanan also points out that there’s hardly any reassurance that extra tax dollars would find their way to a cause as worthy as college debt relief.

This debate speaks to a divide I’ve seen throughout my career: people of good faith trying to improve society in two very different ways.

To introduce one side of this debate, I’ll describe a social service organization I know well that works very effectively to provide opportunities to kids from families with low incomes.

The organization’s board and donor base are filled with generous people who care greatly about the young people in the program. But I have heard many of these same donors and board members rail against higher taxes that would provide increased funding for social workers, recreational and cultural opportunities, and nutrition programs – the very kind of broad-based investments, to my mind, that would help not only the particular kids served by that nonprofit, but thousands of their peers in similarly difficult socio-economic circumstances.

I have come to call these donors “pluckers.” These are folks who think that American capitalism works well for nearly everyone, but that there are a few people, mostly children, who have fallen through the cracks. These donors support efforts that essentially pluck the fallen kids up and provide them with opportunity. They donate not only to the kind of social service program I described, but to scholarships at prep schools and colleges. And these donors enjoy seeing their charitable impact personified in the particular young people they’re benefiting, whom they often get the chance to meet in person.

On the other hand, there are the systems thinkers. These are the people who try to provide opportunity and support to the broadest possible swath of society, to reduce inequality, and to minimize the number of people facing hunger, homelessness, and hopelessness. Given their society-wide scope, systems thinkers naturally migrate toward expanding government programs and expenditures – which, of course, involves supporting increased taxation.

The gift by Robert Smith is a very public and admirable version of plucking: choosing 400 young men, all African American, who can now start their post-college careers without the burden of debt. This is a remarkable gift to those fortunate enough to have graduated from Morehouse College in 2019. Smith’s critics – the systems thinkers, including Anand Giridharadas – respond by saying, in essence, “Sure, it’s great for those 400 men. But Mr. Smith: You’ve been underpaying your taxes for decades. Your tax rate is lower than your executive assistant’s! You should have been helping these students and people like them all along by paying higher taxes. And if you had, you might have a few hundred million dollars less to play with – and give away – today, but more people would have benefited all along.”

But let’s pause to think about why Robert Smith’s gift affected us so profoundly: because we all know the crushing burden of escalating college debt. College debt has risen to $1.5 trillion owed by 44 million people. Student debt (and the potential of mass default) is a huge issue for the economy, and it’s a preoccupation for each of the debtors. Student debt causes young people to delay buying a home or starting a family. We all know friends and family members who are struggling with student debt. To know that these 400 Morehouse grads are freed from that weight lifts our spirits – we’re genuinely thrilled for them – precisely because we know how miserable that burden is for everyone else. But Smith’s gift doesn’t address the overall problem.

There’s a similar issue with healthcare costs. Fully two-thirds of bankruptcies in the U.S. are caused by medical emergencies. Virtually all of us have responded to one-off requests to support friends or family or people we hear about through crowd-funding platforms – or even to drop money into coin canisters at the convenience store for families hard on their luck because of a medical emergency. We help those individuals, a bit, by our donations, but we know that more and more individuals are slipping into crisis each day because the system is fundamentally broken.

The pluckers perform an admirable service. They make a difference to those people in distress lucky enough to benefit. But it’s the systems thinkers – in philanthropy and in public policy – who are working to improve the lot of everyone.

I’ve had an ongoing conversation on this topic for more than a decade now with a friend of mine I’ll call Victor. Victor immigrated to the U.S. from the Caribbean when he was twelve. Victor was plucked from his inner-city public school after eighth grade and given a full scholarship to a prestigious New England prep school. To say that Victor prospered is an understatement. He was a star student at boarding school, went on to an Ivy League college and a top law school, and he’s now one of a handful of black partners at a prestigious New York law firm.

Victor and I agree that the nation needs to invest much more in our public school systems to help the millions of young people attending those schools to learn, have opportunity, and develop into thoughtful and contributing citizens. Victor and I also agree that the very wealthy (a group that now includes Victor himself) should pay more in taxes. But Victor reminds me that programs and scholarship opportunities such as those that singled him out and gave him a special opportunity need and deserve support as well. He’s right.

And how does this apply to the Morehouse gift? We should absolutely applaud Robert Smith for his act of generosity. But Smith should not escape critcism for his advocacy of a tax system that allows him and other top dogs of the private equity world to escape fair taxation. And we should apply pressure to our political leaders and candidates to work systemically on critical issues like student debt, medical costs, and public education.

We face innumerable major problems in the nation and the world. In casting about for solutions, there’s no single right approach. We need the pluckers. We need the systems thinkers. But the more successful we are at improving our systems and making the world fairer and less potentially traumatic for the most people possible, the less need we’ll have for the Robert Smiths of the world to make heroic gifts.