[Note: This post was co-published in a slightly edited form in the Chronicle of Philanthropy on February 11, 2020.]

I’m a New Hampshire voter, which means that, for this week, at least, I’m sitting at the epicenter of the political universe. And having attended some thirty or forty campaign events in the last year, I can’t help but notice that the primary offers some important lessons about effective and failed communication, connection, and persuasion.

So before the ballots are cast, here are some observations about how candidates and their campaigns have tried to attract potential voters – and how the political process might be applicable to those of us in the nonprofit world working to connect with donors.

Speaking highly of yourself is a great way to have people think less of you.

Candidates want to get the point across that they are the best qualified for the job, but it’s tricky to do that without seeming to be a braggart.

At an appearance at our local craft brewery, one candidate repeatedly asserted that he was the only one of the field “who has done stuff.” What that meant, exactly, was unclear to me, and it remained so even after I had an extended conversation with him. I suggested to him that I certainly wanted him to tell me what he’d accomplished in his career, but that it was ridiculous to claim, for example, that his overseeing the construction of light rail to his city’s airport constituted more doing of stuff than someone else’s judicial reform legislation. (The candidate didn’t agree, and soon thereafter dropped out of the race, a decision that seems unrelated to our conversation.) 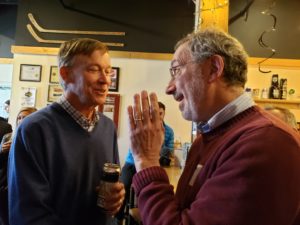 I will defer to my paternal grandmother, an immigrant from Eastern Europe with a heavy Yiddish accent but an impressive vocabulary. She was fond of saying, “Self-praise is no recommendation.” It turns out my Bubbe was right. Bragging is so off-putting.

That’s why it’s useful for politicians and nonprofit leaders alike to rely on third-party testimonials. Let a client or colleague or someone else who knows the organization say great things about you, your impact, and your leadership. Then you can come to the mic, thank them, be modest, and praise the team – the board, staff, community, donors, and members. The point has been made, but not by you.

Like a candidate, it’s important to give the clear impression that you are responsible, thoughtful, experienced, caring, trustworthy, and dedicated. But you don’t want to brag. If you run for public office, or if you are simply on the stump representing your nonprofit organization, there’s a subtle way to undertake self-promotion. Let the people in the audience come to their own conclusion that you’re worth supporting.

Candidates at virtually every event I attend say that they are there mostly to listen to our concerns and answer our questions, but many of them then talk for forty-five minutes or longer. Keep in mind that the audience is usually standing, often in a stuffy room. The candidates’ inclination to talk on and on is not aligned with the wishes of the listeners. We tune out and start eying the refreshment table, or the bathroom, or the exit.

I wish I could say that nonprofit leaders never talk too long, but, well, in this column and in life, I try to be truthful. 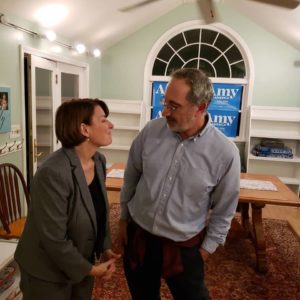 Nonprofit leaders are often admirable but rarely short-spoken. It would be helpful to remember that people with sore feet won’t remember your pitch or your mission. They’ll only remember your disregard for their comfort, and your hubris in thinking that what you were saying was so very worth their hearing.

It’s the rare nonprofit CEO – or politician – who knows how to self-edit. It’s a skill worth picking up.

I recently saw one candidate take 18 questions from the floor in the course of a one-hour house party – a remarkable scene that demonstrated her fluency with the issues and her self-confidence. On the other hand, I went to one event where the candidate only took four clearly pre-screened questions, and in later appearances that same candidate took no questions at all. People noticed and assumed he wasn’t quick enough on his feet to respond to unscripted questions.

If you are speaking to a group, people will have questions about your organization. Give them a chance to ask them. If not, they’ll go away with their doubts unanswered – or, at the very least, they’ll think that it was all a show, and not a conversation.

When I started to ask a question from the back of the room at one campaign event, the candidate interrupted me by 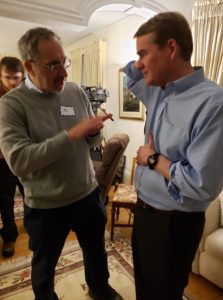 saying, “You’re Al Cantor, right?” I said, “Wow, Senator! I’m impressed by your memory! We’ve only met once before!” He smiled, tapped the side of his head, and said, “Don’t be impressed by my memory. Be impressed by my eyesight. You’re wearing a name tag!” I don’t remember my question or his answer, but I certainly remember how fun, relaxed, and self-deprecating he was. It was a winning moment.

When you speak about your organization, you can and should take your mission seriously, but don’t take yourself seriously. Lighten up. Make people smile. It really helps.

There’s a legendary New Hampshire Primary story from 1976 about how Jimmy Carter went around the state for months, getting three haircuts a week, always at a different barber shop. He’d engage each barber in conversation during the haircut, then take a Polaroid of the two of them and offer to tape it on the barber’s mirror. By the end of a few months, there were dozens of barber shops around New Hampshire featuring Jimmy Carter’s famous smile, with the narrative provided by the barber: “That’s Jimmy Carter, from Georgia. He’s really nice, but kind of crazy. He thinks he’s going to be president!” 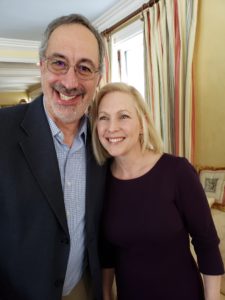 Now we have selfies, not Polaroids, and the most savvy candidates have shortened their speeches and built in time for selfie lines. People each have ten seconds or so with the candidates and then post the photos on social media. (My Facebook friends have seen me with… lots of candidates. I’m sharing a smattering here. Note that the choice of photos does not imply either endorsement or criticism.)

Don’t hesitate to emulate this in your nonprofit work. Find reasons to talk with your donors and community partners at events, take pictures together, and share them. Ideally, in the photo you’ll simply be having a good time, rather than passing a big cardboard check. (If you do it right, the paper checks will follow.)

Organization matters. So does the personal touch.

Thanks to the ease of technology, nearly every presidential campaign sends a text message immediately after an event asking two yes-no questions: a) did you go? and b) did you like it? Given that staff members check people in at the events, the campaigns should already know if you attended, so I find these texts a little off-putting. Plus, well, automated text messages don’t exactly fill my heart with joy.

But some campaigns have staff members or volunteers call you afterwards and ask you if you enjoyed the event. They ask if you have questions about the candidate, if you’re ready to commit to vote for that person, and if you want a lawn sign or a pin or a bumper-sticker. Those interactions are personal and respectful. It’s a conversation.

If you hold a donor event, consider having your staff or board write thank-you notes to attendees. Better yet, call the attendees and ask them how they liked the evening. Show that you care about their opinions. In the process, you build a stronger connection.

In the end, in politics and in philanthropy, connecting with people matters. In both settings, potential supporters make their decisions largely based on emotions, and they remember less about what the presenters said than how the presenters made them feel. People don’t respond well to long-winded braggarts, in life, politics, or charity. People respond positively when they feel engaged and respected. And, yes, a joke or two doesn’t hurt.